Here is the speed edit from the image The Goddess - yaay I figured it out ! this is my first speed edit so please bare with me hehe, I had a fabulous afternoon photographing this beautiful lady, I have a funny feeling she may be a big stiff this morning tho, as she was arched and bent to her limits, may be I should have called it the contortoist !
The Goddess doesn't enter us from outside; she emerges from deep within. She is not held back by what happened in the past. She is conceived in consciousness, born in love, and nurtured by higher thinking.
She is integrity and value, created and sustained by the hard work of personal growth and the discipline of a life lived actively in hope.
~ Marianne Williamson
This entry was posted in Uncategorized by Beverley Ashburner | Leave a Comment
Tweet

My online status literally dissapeared before my eyes and there was nothing I could do about it !

I was playing around with FB (as you do) tweeking some settings and generally just having a tidy up when it asked me to log back in - oooookkkkkkk so in I log only to find out that I have no loger any access to my page ! - I have tried FB help but with no luck and now roughly 6 weeks later I decided that this dissaster wasnt necessarily the dissaster I thought ! in fact it could well be a blessing !

I have for a while had my focus and excitement for photography heading more towards fantasy and fairytales rather than just happy smiling families and bonny children.  My love of family portraiture still remains and will carry on, but with my new found freedom I shall be heading down the fanasy and fairytale composite isle more and more.

I have had to create myslef a new page - Beverley-Ashburner-Fine-Art-Photography-previously-Baby-Shots-Photography so please feel free to pop on over and give me a like :-)

Today I discovered the delights of video capturing the screen, eventually I hope to geta  bit savvy and record a whole edit but for now I have just managed to record the image layers to show how the composite is built up in layers !

Enjoy and feel free to leave any feedback 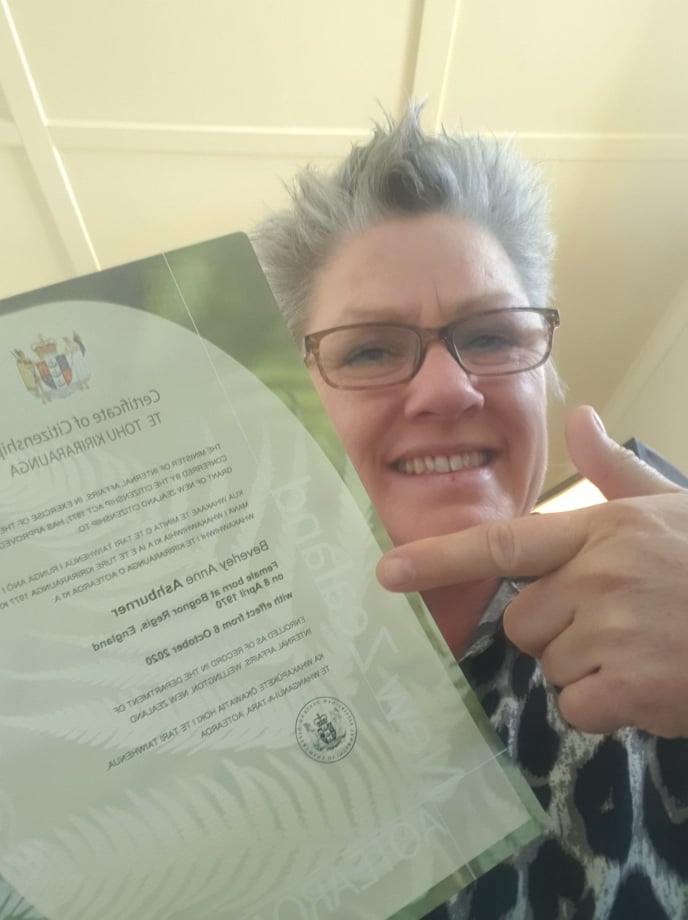 I was so excited to recieve my official CITIZENSHIP certificate yesterday!

I moved to this beautiful country from the UK in November 2005 and I have never looked (or been) back ! When we arrived I had 3 boys aged 11, 9 and almost 1, all 3 boys have their birthdays within 3 weeks of eachother and my youngest celebrated his first birthday 2 days after landing, the other 2 turned 10 and 12 the following week and the week after.  It was surreal to celebrate their birthdays in the summer instead of the good ole UK winter, and we even saw our first Christmas parade in Auckland wearing shorts ! I didnt think i would ever get my head around shorts at Christmas.  Our first Christmas we decided to full out Kiwi and embrace the BBQ... Its was the best Christmas i think i have ever had ... there were no bored children itching to get away from the traditional sit down turkey dinner, everyone was outside plates on laps and grass helping themselves to what ever they wanted and playing in between.

As the years went by I became more and more in love with the country, its people and its culture.  After 5 years I was eligible for citizen ship and promised myself there and then that I would do it ....... I said this every year for the next 10 yrs, until this year I decided that I really would - and I did :-) ... I couldnt be prouder to hold this in my hands and officially say this is my home, so many things have happened over the last 15 years - I added a daughter to the mix and boy has she mixed it up hehe, I have also been blessed with a grandaughter, who has completely stolen the show and my heart ! and a few weeks ago I started Te Reo lessons...... I am totally out of my comfort zone where languages are concerned, but the girls are amazing and so patient with this old forgetful language phobe hehe and I can't wait to start again after the holidays.

My life here has its ups and downs as does everyones, but I am so blessed and so grateful and could not imagine living life anywhere else ! so heres to the next 15yrs and more in beautiful Aotearoa land of the long white cloud and now oficially home.

Creating tangiable memories is something I am incredibly passionate about, all too soon our littleones are grown or our elders have passed, and our memories fade.  Family portraits are so precious, they remind us of how we change, who we are and where we came from.  The digital age is upon us and has stolen many years of lost or forgotten moments stored on devices, as we have evolved into picture takers but not photo printers.

I want to bring back the beauty of Images on our walls, create talking points and empowering our children.  Our young (and not so young) people LOVE to see photographs of themselves pride of place throughout our homes, and it creates a sense of security and belonging.  I aim to put the excitement back into recieving beautiful prints or ready to hang canvases or framed images, that you and your family can enjoy for years to come.

The cosmos, the universe, life, reality ... what really is it??

I often wonder as an adult what it would be like to see the world through the eyes of a child again. I watch my family expand with wives and girlfriends, friends, children and grandchildren, and I am always a little jealous of the wonder the littlest people see in the world.  The imagination and insight into things long forgotten.  A spiderweb is never just a web, and hole in the ground is anything but just a hole, the insects and grass that are examined with such beauty and wonder, and the things we simply brush off or walk past unnoticed, are sometimes the most fascinating of experiences, the textures and depth of nature and the sweet sound of the birds and buzzing of bees, things we simply do not notice any more.

What would happen if you realised all that was and all that could be are far more than we ever imagined??, Is the world we live in really just what we see and what we are taught, or is there much more. Would we be falling into a whole new way of being, or just falling out of the old one??